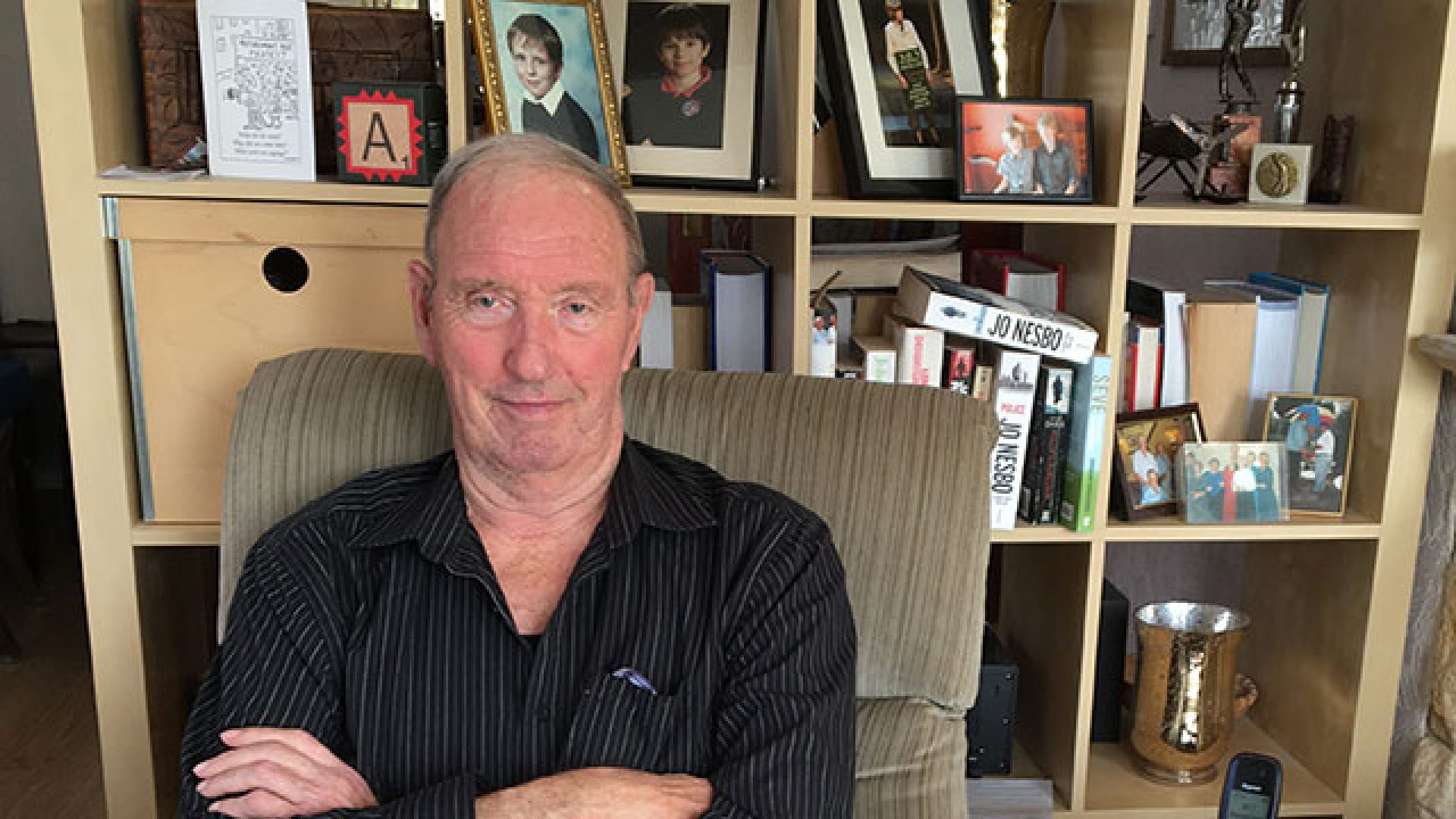 When you talk to Michael you cannot fail to notice his love of sport and the active nature of his lifestyle, whether watching on the television or on his local golf course – sport is part of him. But Michael’s health had meant that his three visits to the golf course had to stop.  In 2013 he was diagnosed with a cancerous tumour in his lung and unfortunately despite removal, the cancer had spread to his brain. Over the next 24 months his health became critical and after brain surgery.

But five months later I started getting horrific night sweats, three or four times a night, sometimes more. As a result of the brain operation, I’ve got limited movement in my left side and left arm so changing pyjamas was difficult. For seven months I didn’t get a proper night’s sleep, nor did my wife, Dawn. I had no quality of life. The GP didn’t have an answer nor did the oncologist or neurologist.
Eventually, after seven months, I was referred to Dorothy House. That changed my life. I was quickly assessed and the very next day I was put on steroid treatment for the night sweats and referred for acupuncture. I had the acupuncture appointment that same week. Honestly, within a week, my appetite went from zero to eating everything in sight. Now, I have to stop myself. My sweats have gone from four or five a night to a couple – and not heavy. I can deal with those myself. That’s fantastic for my wife too.
Plus I’m going out more now. Dorothy House Hospice Care said they’d get me back playing golf. They have. I’ve played nine holes twice, but I’m waiting till better weather so I can use the buggy as my balance is a bit limited.
Now I’m reducing the steroids gradually. I’m booked in for some reflexology and another four acupuncture sessions. I’ve had two major operations in two years and three months of chemotherapy so my body’s been completely out of balance. I feel so much better now. I’m sleeping and eating better. DH is so positive. And the results were so quick. I asked if I could have a blue badge on Tuesday. I had it by Saturday. It’s really given me my life back.
I’d recommend Dorothy House to anyone. Go, and listen to what they’ve got to say. I’d had seven months of getting nowhere – beating my head against a brick wall. As soon as I spoke to DH the first thing they said was that night sweats were pretty common in cancer patients. No one had said that before. They also said acupuncture works well for night sweats. Acupuncture and steroids combined do work well. I have a review once a week. Now, instead of feeling dopey all day because I’m so tired, I’ve been going out. I’ve got my life back. . I have a large family – five sisters and four children. We go off on holiday four or five times a year, normally with three of my sisters. I’m planning the next one. And as soon as the weather gets a bit better I’m off down the driving range.
My sisters keep saying: Why didn’t they refer you to DH before? You were struggling for six months before you got a referral. And within just one week my life was changed. They were confident they could sort me out. That was the first positive action I’d had. I wasn’t depressed but I was struggling.
Mentally, I had a turn around. My family could tell the difference in me just from my voice. I always like to have a clear direction. Now I’ve got it. Back to driving, back to holidays, back to golf. Back to Michael.